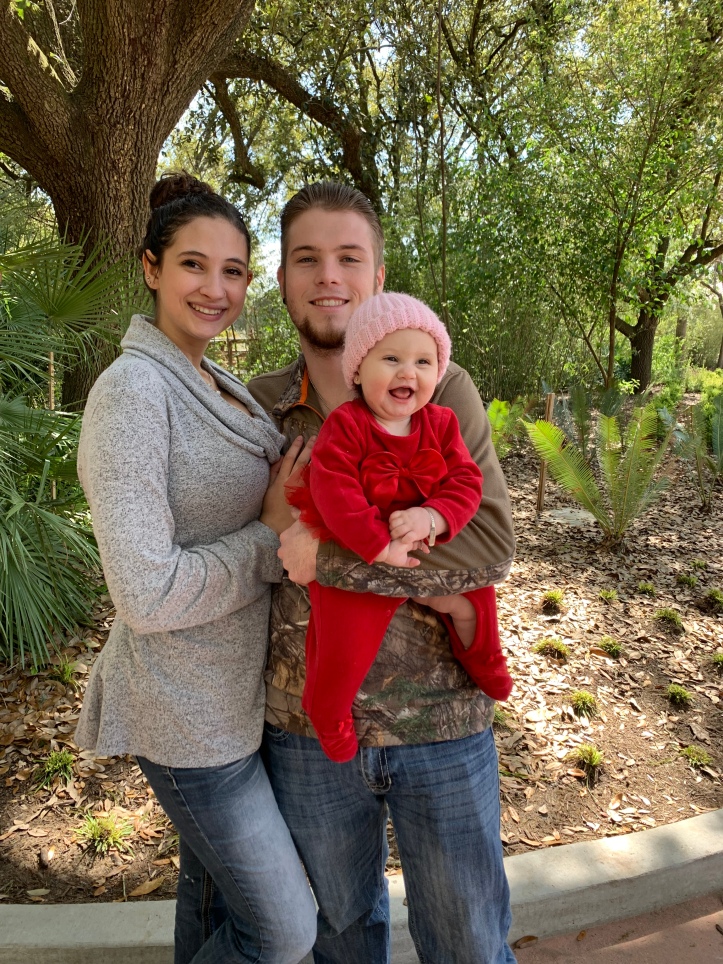 8 am hit us like a rock, till Peyton set our alarm clock for another hour of snooze, without even trying. 9:03 am Paighton woke us both up with a smiley face.

Peyton shoot up like a canon at the fact that we needed to leave our house at 10 am. Any new parent knows that less than A hour to get your whole family ready and out the door is nearly impossible! For us it takes a record breaking two hours and by that time Peyton is still in his underwear searching the room for socks. This was a once in a life time deal that we actually got all our diapers, baby, car seat and a male with clothes on in the car.

The 45-minute drive to the zoo was actually quite peaceful. Peyton and I listened to Upchurch the whole way as P slept and saved up her energy for the view of the animals! Our peaceful adventure ended when it came to find a parking spot. If I told you it took us nearly as long as it took us to drive there I wouldn’t be lying. All we needed to do was just park our truck, the first thing they teach you in drivers Ed.

we than had to drive a few more miles down the road to another parking lot that we had to catch a shuttle to get to the zoo. It amazes me how some buses don’t have seat belts and the drivers can barely maneuver around the city. I can’t be complaining because in not a perfect driver but at least my passengers have seat belts and I don’t drive on the sidewalk. For P’s 1st bus ride it was nice, till we realized the couple in front of us were probably on their 4th date. Everyone knows the ”honeymoon” stage where as a girl you will laugh at anything he says because you’re deeply in live or falling fast. Let me just say that all these guy’s jokes were not funny. I’m kinda gifted at dad jokes 101, so when he was saying them they were just interesting. But besides the point this drive was a good 10 minutes. The whole time P wanted to stand up and wave to everyone in the back. Than she would glance out the window and smile. She’s just a bundle of joy!

when we finally arrived at the zoo it was a lot more on the colder side. So just as a mom I am I bundled her up with a huge blanket and honestly, I’m glad I did because even I was a little cold myself. Peyton always tells me it’s not that cold outside or I’m bundling her up too much. Would you believe me if at the end of it all he said

“I’m glad you bundled her”.

This happens every time, Peyton tells me to leave all my 5 blankets at home. That she doesn’t need her snuggle me, or having a whole outfit underneath her full sleeper is a little much. Till we get into the situation where it gets colder and I have enough blankets to keep her warm and us. Or if it gets too hot all I have I to do is just slip off the sleeper and there I have it! A whole outfit that I don’t have to go to a restroom to change her. I see it as I’ve come prepared.

Till we arrived at the zoo and I totally forgot that I didn’t pack Peyton and I’s lunch! It wasn’t a big deal because we ate before we left. I did however remembered to pack a jar of baby food for P to eat when it’s lunch time. Sweet corn and green beans was the lucky winner I just happed to grab. Paighton is in this stage where she’s been a picky eater when it comes to baby food so I was just hoping that she would eat it. Of course my hopes were destroyed because after the 3rd bite she had, had a enough and was shaking her head no.

She doesn’t know what “no” means.

Keep feeding her she will get use to it.

She’s a baby just feed her and make her eat.

However I just ignore those comments because my child knows what she likes and dislikes. I’m not gonna force feed her just because someone thinks she should be eating baby food at the age she’s at.

While we’re sitting at the table and our friends finish eating lunch I noticed that two bees kept flying close to her, I believe they were trying to get the orange she was eating. We all jumped up and ran from the table like screaming toddlers. I won’t even be scared to admit that I can’t stand bees. I’m afraid that they will sting me. Throughout our whole zoo trip these 2 bees were just following us. I felt like they were the two flys off of the movie Racing Stripes.

It didn’t matter if we walked a mile and a half or tried to run on our tip toes with our backs curved out to try and get away. At one point the bees tried to get into paightons snuggle me, (which she was not in) and I almost just left the stroller and made a break for it. I don’t do anything that stings, even if people tell that they are more afraid of me than I am of them.

Our animal adventure started out with looking at giraffes and an ostrich that wouldn’t stop walking up and down the fence. We then made our way to the petting zoo and found a beautiful lama! However that lama didn’t have a care in the world if we were there or not. Soon we found ourselves looking at cows and goats. To me that’s a normal thing but I have to remember that not everyone has to see those animals on a daily. I have a friend who’s been in Texas about 4 years and has never seen a cow in person. This shocks my mind to the extreme. As we made our way through the crowd of people we arrived at the lions dean.

Posted on the window it said,

”An animal in this exhibit is undergoing medical treatment.”

That hit close to home because animal science is the field I’m studying! All the lions were sleeping (which i couldn’t blame them, at this point i was ready for a nap). A new crowd comes up behind us and this guy shouts out,

Why does everytime I come to the zoo all these animals are sleeping?

Now I thought to myself, is this man uneducated? We all need to sleep to be able to survive. These animals aren’t just gonna stay awake 24/7 for your entertainment.

The worst was yet to come. Now this man starts to make loud noises and yelp in return of trying to wake these lions up. Oh I bet he wouldn’t be acting a fool if there wasn’t glass in-between him and the lions. He would be wishing they would stay asleep as he passes by.

The ape exhibit was just educational, who knew that a metal called tantalum in your cell phone you use every day comes from the ground and For people to use it they have to destroy gorilla habitats. https://www.houstonzoo.org/save-wildlife/take-action/electronic-device-recycling/ Please go read all about this!

I must say this was an educational day for sure! As you may know, the only show paighton watches is my baby can read. Every time the elephants come on the screen she gets all excited. So it was finally time for her to see a real elephant. Just as I thought, as soon as she saw the elephant her arms started to flop and she was talking up a storm. It was just a magical moment for her to finally see a real elephant in person! After two hours and what felt like a four mile walk we called it a day and started to head back to the shuttle buses. After a long day paighton fell asleep right in my arms. This Sunday was one to remember! From the bees to the bus ride back we had a blast.

Getting ready for bed that night I made a comment to Peyton how it felt normal to go out to the zoo and just have a good time without people staring at us probably trying to guess my age. We both realized that hanging out with people who are also parents gives us the confidence of feeling less like a outcast in the age group were in. 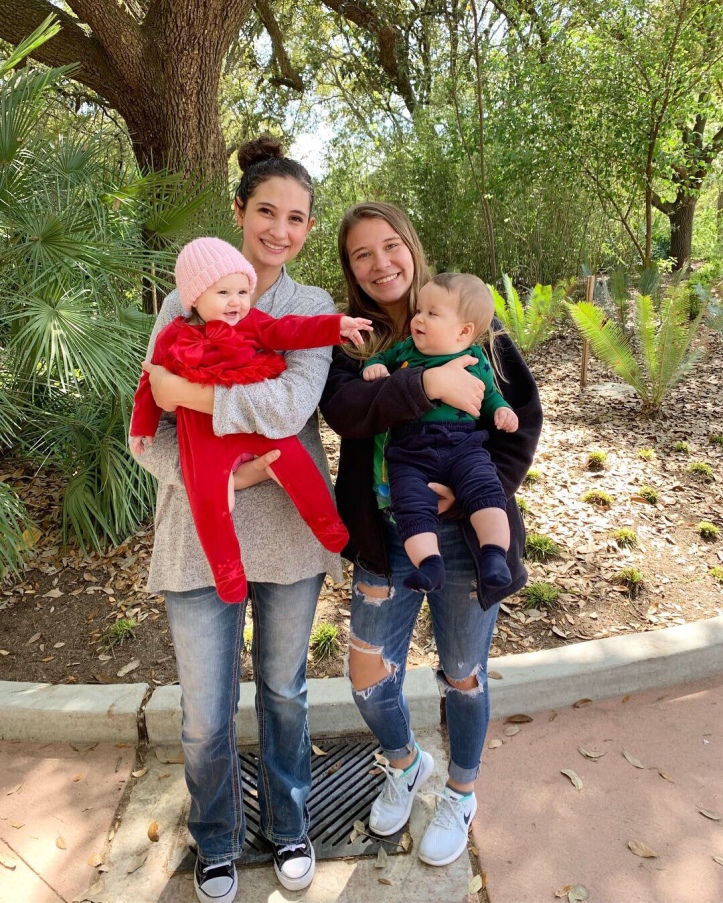 It was definitely a happy field trip day with the family. 💛